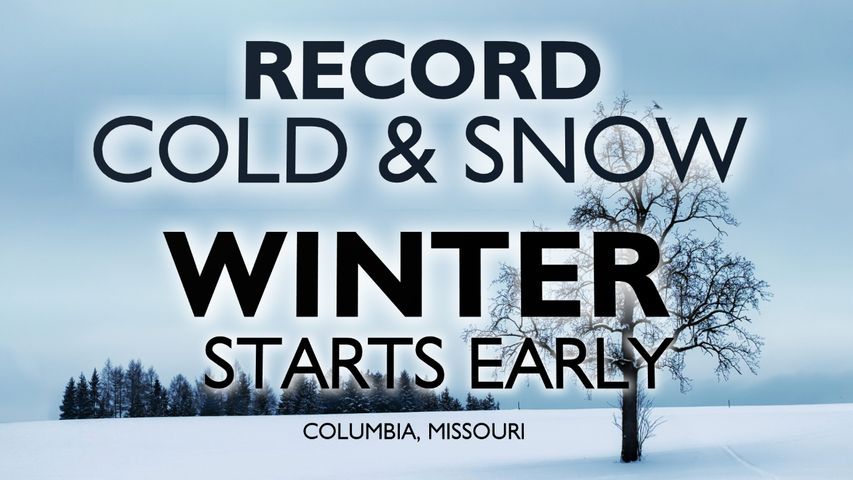 COLUMBIA - Winter started with an early preview in October, but it went full throttle at the start of mid November. Arctic air stretched from Canada to Mexico, breaking records in multiple states.

One mid-Missouri business, Sparky's Ice Cream, is seeing repercussions from the cold weather. Maggie Garrigihan said, only two customers came in during two hours when the temperature was nearly 10º.

"Nobody really wants to come out for ice cream when it's 7º out so it doesn't really matter what time it is," she said.

The Lavaute family chose to spend the coldest November 12th embracing the weather. Alicia Lavaute said, even with the harsh cold, she will not being staying inside all winter.

"There is no bad weather there is only bad clothes, so it's up to you, you've got to enjoy the weather no matter what it is," Lavaute said.

This is especially interesting because Columbia has only ever been this cold (single digits), this early in the cold season, twice before. In 1991 the low temperatures got down to 5º and 0º on November 7 & 8th. That makes 7º on November 12, 2019 the second coldest start to a winter season in the past 129 years, because the previous two colder temps both occurred in a single year, 1991. For reference, the average first single digit temp usually hits around December 18th.

The last time Columbia broke a low temperature record was nearly a year to date, on November 10, 2018 when the low was 16º. November 2018 was also the fourth coldest on record.

Columbia recorded 1.1" of snowfall on November 11th, 2019 at the COU airport (where the Columbia weather recording station is) which bested the 1911 record of 0.4".

NOTE: A previous version of this article said it is the third coldest start to winter, but actually because both of the colder temps occurred in 1991, that makes 2019 the second coldest start.

October 2019: Third snowiest and sixteenth coldest in Columbia despite record warmth early on

A conversation with the Missouri State Climatologist about climate trends

Missouri man freed from prison with help from WNBA star

Greek Life at MU to make changes for fall semester