Support for renewable energy has reached a 'ceiling effect' 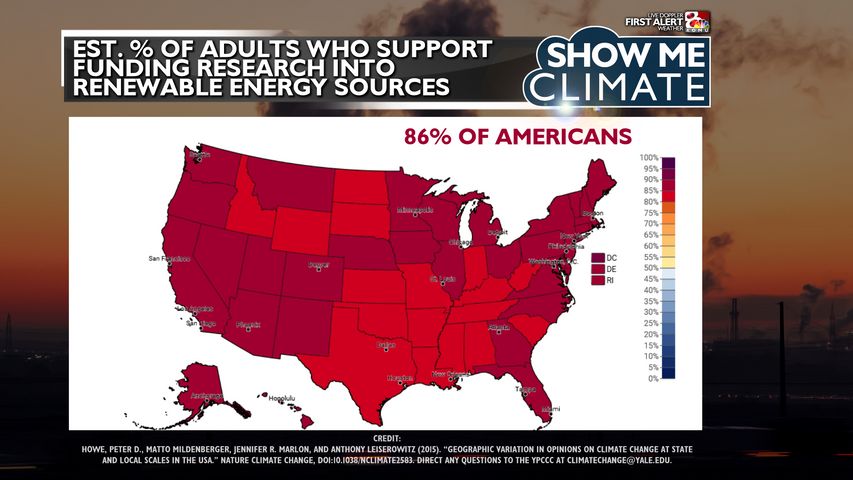 COLUMBIA - The science is clear: the only way to slow our rapidly changing climate is to rapidly reduce the carbon footprint humans have been leaving behind since the mid-1700s, the beginning of the Industrial Revolution. What’s the solution? How do we do that?

Renewable energy comes from the sun, from the rushing water of our rivers, from heat below the surface, from something as simple as the blowing wind. We can create electricity from these natural sources. The cost to do so has become cheaper than any model predicted.

As for the economy, two of the top three fastest growing occupations in America are Wind Turbine and Solar Panel Service Technicians.

The alternative is to keep extracting finite resources that took millions of years to form deep within our Earth and use them in the time it takes to blink, polluting our atmosphere along the way and warming our world, creating a domino effect on our climate systems. To be clear, this is already happening, but there is still time to slow its progress.

To get the scoop on what Amercians and Missourians think about renewable energy I reached out to the people who research just that. The Yale Program on Climate Communication has been performing surveys, research and modeling for years to determine what Americans think about the (undisputable) rapid climate change we’re experiencing.

Jenn Marlon is one of those researchers. She sat down with me to discuss how many people support renewable energy and just how important that transition is.

Below is part of the conversation I had with Jenn.

Jenn Marlon: Renewable Energy is critical to transitioning away from fossil fuels. We have relied very heavily on fossil fuels throughout the Industrial Revolution. And they have brought us great things: they have brought us cars and trucks and computers and iPhones and laptops, and refrigerators and washing machines. But it's time to break up with the old boyfriend, and make a transition and renewable energies are what is going to bring us into a clean future with more green jobs. With that (comes a world that is) better for our health, better for our economy, it will keep us safer. But it's a difficult process to transition.

Renewable energy is what we're going to use to power our cars and trucks. We're going to use it to power our appliances. And we're going to need to overhaul the entire grid in the U.S. and electrify everything. But this is the way forward because if we can electrify everything, then we can get that electricity from the sun, from the wind, from hydro power, from heat pumps in the ground. Nature has so many solutions for us available, we just have to figure out how to work with nature instead of against it.

Kenton: And with Yale’s research, have you seen any changing opinions from Americans, or their usage of renewable energy?

Jenn: It's interesting, Americans have supported renewable energy since the very beginning of our surveys. If anything, it's gone up a teeny bit, but it's already so high that we've reached what we call a ceiling effect. So nationally, 86% of Americans want more research on renewable energy, they want to use more renewable energy. And in Missouri, it's 85%, so essentially the same as the national average.

So everyone is very supportive of this. But we need corporations on board. We need the government on board. And we need consumers to demand more of this clean energy and we need to make the choices easier for them to get it from their utilities, to buy it when they're buying a new appliance. And we need those charging stations so that they can drive and not worry about whether there is one or not. So we need to demand support for these kinds of things to help make this transition faster.

Next week we’ll be discussing solutions and actions we can all take as individuals as well as what needs to happen at the international level to slow our rapidly changing climate.

If you are interested in learning more about how to implement renewable energy, save money, and reduce your carbon footprint, here are some places to start:

Columbia Water and Light has a rebate program and other resources available.

For those near St. Louis you can check out Grow Solar, a project in St. Louis to expand solar energy in the area. You can also read and listen to more about the project here.

The Midwest Renewable Energy Association is a non-profit working to expand renewable energy adoption through innovative programs, renewable energy training, and educational events. They also have a training program for solar installers if you’re interested in the field as a job (one of the fastest growing occupations in America) and a careers pathway for students interested in pursuing a future career in the solar energy industry.