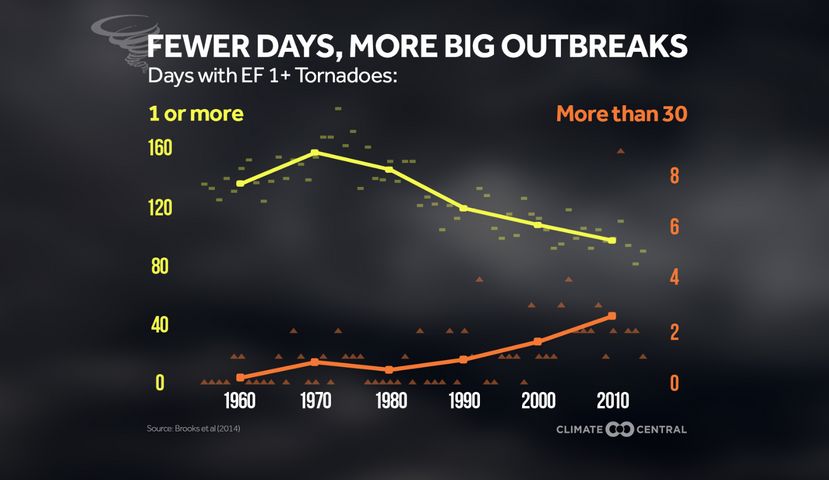 COLUMBIA - As we all know by now, the world is warming. It is simply a fact.

Take a look at the ten hottest years globally on record and you’ll find that 8 of them occurred in the past decade, and the top five are comprised of the past five years. According to an increasing amount of scientific research, our warmer climate may be changing the severe weather season.

More specifically, today I want to talk about tornadoes.

First of all, we can see an upward trend in the number of tornadoes in large tornado outbreaks.

In one study from 2016, when defining an outbreak as having six or more tornadoes in a six-hour period, there are about five more E/F1+ tornadoes in the largest outbreaks now than in the 1950s.

Even though a warming climate provides more energy for the thunderstorms that spawn tornadoes, it’s still unclear how climate change is affecting wind shear, which is the necessary spin that mixes these ingredients and generates tornadoes. How tornadoes react to a changing climate continues to be vigorously researched, and more trends are surfacing each year.

One study shows there has been a subtle but detectable increase in tornado risk over the past few decades. To be clear, tornadoes are not going away in the Plains and Upper Midwest, but more have been recorded in the Ohio and Mississippi River Valleys and to the east.

While there are connections to climate variability modes like ENSO, or the La Niña/El Niño patterns, these overall trends are consistent with an eastward shift in the drier climate zone of the western U.S. and with climate change projections indicating that severe storm environments will become more common further east in the U.S.

This may also suggest that while Tornado Alley still remains consistent year-to-year, Dixie Alley may be expanding further north.

In addition to the changing geography and number of tornadoes, there is a shift in the time of year they occur. According to two separate studies, on average, tornadoes are starting about a week earlier in the year in the tornado alley region from Nebraska to Texas, and summer tornadoes are declining nationwide.

Finally, a research study just released in December 2019 found that while the number of active tornado days is increasing, the actual spatial dispersion of these tornadoes is decreasing. In other words, the risk of tornadoes is becoming more focused over a smaller geographic area, and that area is more consistent with Dixie Alley.

Clearly, this is becoming an increasingly researched sector of the scientific community and in the coming years we should know much more, so stay tuned.

You can read and watch other Show Me Climate reports at komu.com/climate.