Rally for animal rights turns into support for local business 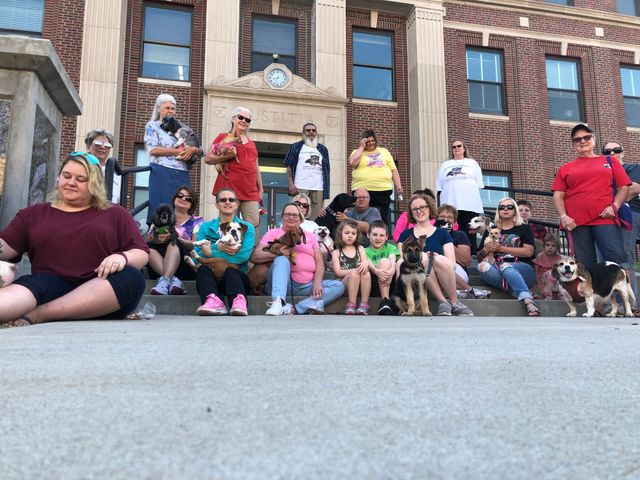 MEXICO - Outside the Audrain County courthouse Wednesday, a group of people rallied to create awareness about pets and the rights they have. The rally turned into a measure of support for a local business owner.

Taylor Stout and James Johns face charges after police said they abused a dog while working for a groomer in Mexico.

That dog, Petunia, was the initial focus of Wednesday's event. The Parade of Paws for Petunia brought about a dozen owners and their dogs. But the group also rallied around the owner of the pet store where the alleged abuse happened. People said Nancy Buck, the owner of Downtown Pet Store, shouldn't be blamed or attacked for what happened.

One woman initially was not going to come, but said supporting her long-time friend was the push that brought her to the courthouse.

“It’s because of Nancy. I’ve known Nancy for 25 years and she’s always groomed all my dogs,” Sabrina Gruer said. “I have so much compassion for what Nancy is going through. I just felt like I needed to be here and support her.”

Buck's niece, Shaylyn Barclay, said it is not fair for her aunt to be correlated or tied to this event since Buck wasn't aware the abuse was happening.

“I just don't want this to hurt [my aunt's] business because she is great at what she does and she had no idea this was happening,” Barclay said.

Since the alleged abuse came to light, Buck installed a TV monitor in the lobby so customers can see what's happening in the grooming areas. One of the groomers said they can't let owners come back into the grooming area due to insurance purposes, so this was the next best way to assure customers the animals are being treated well.

One of Buck’s customer, Jerry Shields, has been using her services for more than 30 years and he said he sees no end in sight.

“I get grooming here once a month and [my dog] was just as excited about here as anything,” Shields said.

Stout and Johns have another hearing set for October 23rd. Local residents as well as local business are planning to show just as much support then as they did Wednesday.

The bar and grill, Aussie Outback and Down Under, provided free ice cream cups to dogs and free coffee to the owners at the parade.

“We pay $20 for a tub of ice cream, but seeing the pups happy and owners happy is priceless to us,” said assistant manager Amanda Gipson.