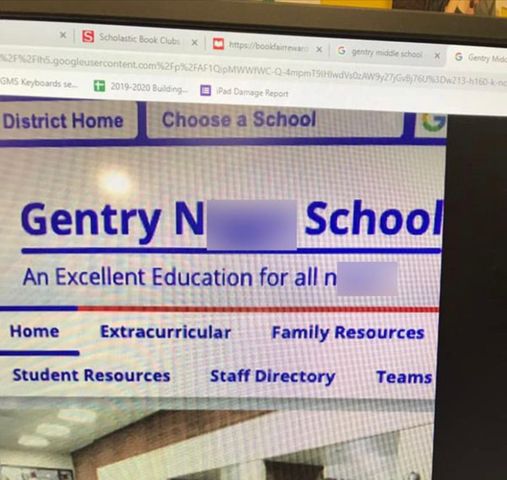 COLUMBIA - The Columbia school district is investigating after a racist image imitating the web site of Columbia's Gentry Middle School showed up on Google.

Viewers sent a screenshot of the image to KOMU 8 on Tuesday.

In the image, the school's name was altered with the N-word in place of the word "Middle" in "Gentry Middle School." It also replaced the word "Students" in the slogan "An Excellent Education for All Students."

One community member, Adonna Mason, said she is not standing for this. She, as well as her grown children, all went through the Columbia Public School system and she is upset with how this instance is being handled.

"Just because my kids aren’t in the system currently, doesn’t mean I don’t care," Mason said. "It affects our community and I want us to do better.”

In a statement Tuesday night from spokeswoman for Columbia Public Schools, Michelle Baumstark said, "Yesterday we were alerted to some inappropriate images posted to a Google search engine page related to Gentry Middle School, including the image in question. Google immediately removed the images at the request of the school district."

Baumstark said CPS is taking the incident seriously and is currently investigating. She also said the school's actual web page was never compromised.

"Appropriate disciplinary action is being taken," Baumstark said. "Columbia Public Schools and Gentry Middle School are committed to maintaining a positive school-community for everyone."

While CPS is taking steps to move forward with the investigation, Mason is not happy with how it has been handled.

“It’s bothersome that this came out on social media as opposed to an alert from the schools that that had happened," Mason said. "I realized that this is a public website and CPS has no control over that, but once that happened they should’ve come out and said something to the community, to the parents about the incident itself.”

In a follow-up email Wednesday, Baumstark said the district is taking steps to inform parents.

"Parents were sent a letter alerting them to the incident and that it was being taken seriously and addressed," Baumstark said.

As this advances, Mason said she is ready to be even more hands-on with the community.

“I will find myself probably at a few more city council meetings and school board meetings," Mason said. "Just to find out who’s running the show and how they handle this going forward.”

[Editor's note: This story was changed to reflect information received from Columbia Public Schools that the image being shared on social media was of a mocked-up image of the school web page, not the school's actual page.]