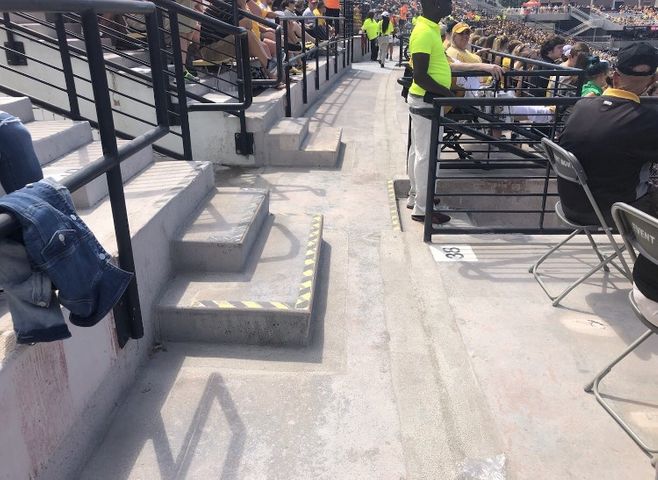 COLUMBIA - MU students will pack Memorial Stadium to cheer on the Tigers during Saturday's SEC opener against South Carolina, but some students may not feel included.

One step on the east side of the stadium limits the ability for students using wheelchairs to access the student section.

Lawson, a senior, first had an issue with the step blocking her path to the student section when she was a freshman.

She became frustrated with her inability to be a part of the student section and this led to her not attending Mizzou football games.

"It was just one of the fights I was like, 'You know, they will probably fix it eventually,'" Lawson said. "So I just kind of walked away that battle."

Four years later her freshman roommate, Holler, still could not access Mizzou's student section during the Tigers game against the West Virginia Mountaineers on Sept. 7.

"Now my roommate is having the same issue and it's just really not acceptable," Lawson said. "When you sit in a section that's a part from the student section, it just really makes you feel excluded."

"It's not a fun feeling," Lawson continued. "It's not the same Mizzou experience that everyone else gets and it's not an equal opportunity to that experience."

Holler and her friends arrived to the game more than an hour before kickoff on Sept. 7 and her issues with accessibility at the stadium began at the student gate.

Stadium staff place a maze of barriers outside the student gate 4E on the east side of the stadium to keep students in a line.

However, Holler was unable to navigate through the barriers.

"There [were] a lot of barricades," Holler said. "So we went through the accessible entrance."

When Holler tried to enter the stadium through the accessible entrance at gate 2E, game day staff gave her trouble about using her student ticket at a non-student gate.

"They told me my pass wasn’t going to work because I had to go to the student section," Holler said. "[But] that way wasn't accessible."

Eventually someone from the student section gate came over and scanned Holler and her friends into the game.

After entering the stadium, Holler made several attempts to enter the student section.

Each try was unsuccessful due to the step on the landing outside the tunnel that connects the concourse to the stands.

Holler said her power chair would have tipped over and gone down the steps leading to the field if she had tried to go around the step blocking her path.

She eventually ended up sitting in the designated accessible section behind Marching Mizzou.

"I was really defeated," Holler said. "I wasn't feeling like I was being included just because I wasn’t able to get in."

Before she left the game at halftime, Holler took a picture of the step and texted it to Lawson.

"She sent me a picture of what she was experiencing," Lawson said. "And I initially started crying."

Later that day Lawson and Holler reached out to MU's Disability Office.

In the weeks since Sept. 7, the disability office has set up a meeting for Lawson and Holler with Mizzou Athletics scheduled in the near future.

The Deputy Athletics Director, Nick Joos, said "we received feedback of a potential accessibility issue within the student section at Memorial Stadium."

"As a by-product of adjusting our student seating within the stadium prior to this season, we now have ADA accessible areas within the middle of the student sections that were not previously available," said Joos.

Lawson and Holler are not looking for an immediate solution to the problem.

Both want to make sure that the issue will be addressed for future students attending Mizzou football games.

"I am not expecting improvement right away," Holler said. "But I would like to see some change."

Lawson says MU is an "inclusive university", but she would like to see more accessibility to Mizzou's student section at football games in the future.

"Mizzou Athletics is committed to providing the best possible experience for all fans visiting our venues," said Joos. "We will ensure that our game day staff are informed of the accessible routes to this new area."