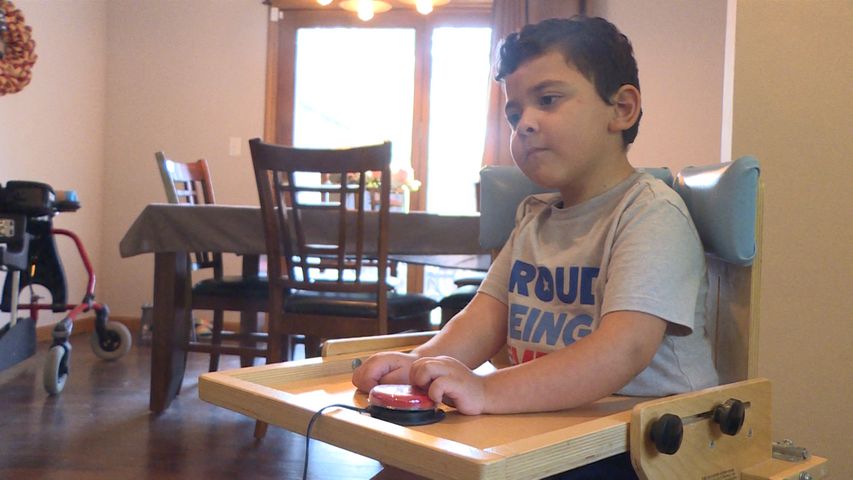 COLUMBIA - Physical therapists with MU Healthcare's Children's Therapy Center and an army of volunteers came together to help make playtime a little easier for children with disabilities.

The annual event is called Pascale's Pals Switched. It's an event where volunteers learn how to rewire toys to put a bigger, easier to use, button on them.

It's the second year for the event that benefits children like 8-year-old Dalton Ferreiro.

"I don't want him to be limited later in the future to where he has to sit on the sidelines and watch life pass him by," Dalton's dad, Dan Ferreiro, said.

Dalton was born healthy, but at the age of six months old, a virus caused his blood sugar to drop dangerously low.

"He was seizing for hours when the babysitter thought he was sleeping. So, he has permanent brain damage from that," Dalton's mom, Amanda Ferreiro, said.

Until, they learned about Pascale's Pals Switched event, where a 50-cent wire and a bigger button, changed how their son could play with his toys.

"If I can give him just a little bit of joy out of pressing a button to make a toy work, then that means a lot to be able to see his face glow," Amanda said.

Dalton was one of the children to receive a toy from Pascale's Pals.

And it wouldn't happen without volunteers like Lance Hall.

"Every parent wants their children to be able to grow up and be safe and happy," Hall said. "I just wanted to come and be a part of it."

Vicky Kappelmann and her husband even made the drive from St. Louis to help and gain a new skill.

"We are here learning how to do switches because our granddaughter needs toys with switches," Kappelmann said. "We will go anywhere to learn something new to help her. It's a thrill to see her so happy."

Chole said she and another physical therapist came up with the idea for the event. She said companies charge a much higher price tag for similar toys and that motivated them to give families another option.

"We decided that it was really unfair that families that have children with disabilities have to pay expensive prices for toys," she said.

"Something that we take for granted in other children, that's really hard for him to do. Just those little milestones really mean a lot," Amanda said. "Every child deserves the capability to play."

Pascale's Pals funded the event for the second year. Last year, they gave away more than 200 toys to 50 families in mid-Missouri.

This year, they're hoping to increase that goal. The group held one Saturday event in September where volunteers switched 100 toys. There's another event happening on October 19th. There are two sessions that Saturday from 9 a.m. to 11 a.m. and the second runs from noon to 2 p.m.