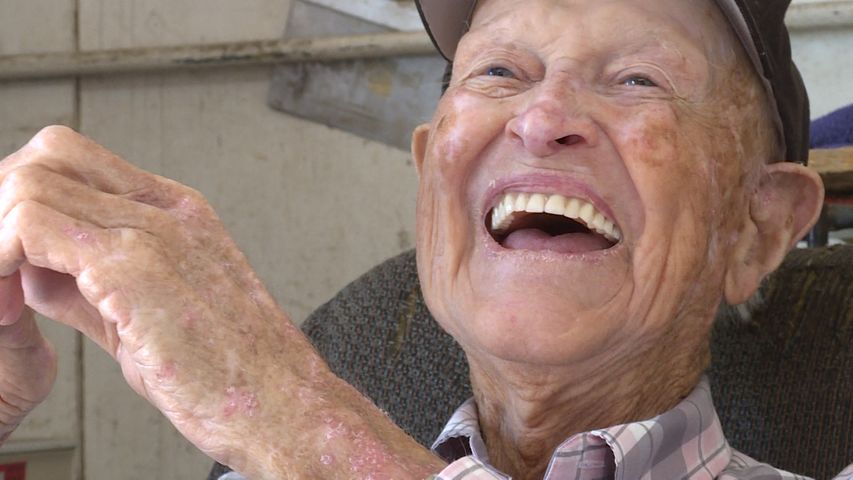 COLUMBIA - From ear to ear, it's hard to miss 94-year-old Elmo Winterhalter's smile.

"I don't know I've always been that way, ever since I was a kid," he said about his positive demeanor.

You'll find him greeting customers with his signature grin on Mondays and Fridays at Oakland Plaza Car Wash on Vandiver in Columbia.

"He's always here. He's always smiling," Oakland Plaza Car Wash owner, Joe Wood, said. "It doesn't matter how bad of a day I'm having, anyone's having. Mo walks in with the same smile day in and day out."

You could say Elmo is just tickled to be alive.

"I just thank the good Lord for keeping me around," he said with a laugh.

Known as Mo, he's lived in Boone County for nine decades. He was born in 1925. He's lived through the Great Depression, 16 different presidencies and served in World War II.

"There's a lot of things I like to forget about. I don't like to talk about it," he said. "I was nervous as a June bug when I got home."

Even then, while serving in the war, Mo was smiling.

"There used to be this paper with an article of this guy they called 'Smilin' Jack' and he was always smiling and some of my buddies just started calling me 'Smilin' Jack,'" he said.

It's not only what Mo has done in his life, it's what he's still doing.

He's still working. He retired after 30 years with Boone County's street division only to pick up a new job at the car wash. This year marks year number 25 there.

"I sit in the house by myself looking at four walls and it gets lonesome. I get to come in here and meet people and talk to them," Mo said.

"When Mo was young that was just part of life, was going to work every day and there wasn't any excuses and he's not about to let his age be one of them," Wood said.

"He blades my driveway in the winter time," one of Mo's neighbors, Daryl Isgrig, said. "He takes care of the neighborhood. He takes care of everybody up and down this road. Always has and always will probably."

He's still there for his family.

"He likes to do everything I do," Mo's son, Randy Winterhalter, said. "Never has a bad day it don't seem like or least he don't tell us if he does anyway."

Even after losing his wife ten years ago and one of his two sons two years ago, he's still smiling through the pain.

"I got all these pictures I can look at them and think about all the good times we had...you just got to grit your teeth and bare with it and go on," Mo said. "I guess I'd rather be happy than sad."

If smiling makes your face hurt, then Mo's must be pretty sore.

"I'm glad somebody likes me," Mo said with a smile and laugh.

Mo has four grandchildren and three great-grandchildren. He was married to his wife, Wanda, for 56 years. After 94 years, he said his advice would be to do what you're told and like his father told him, do it right.