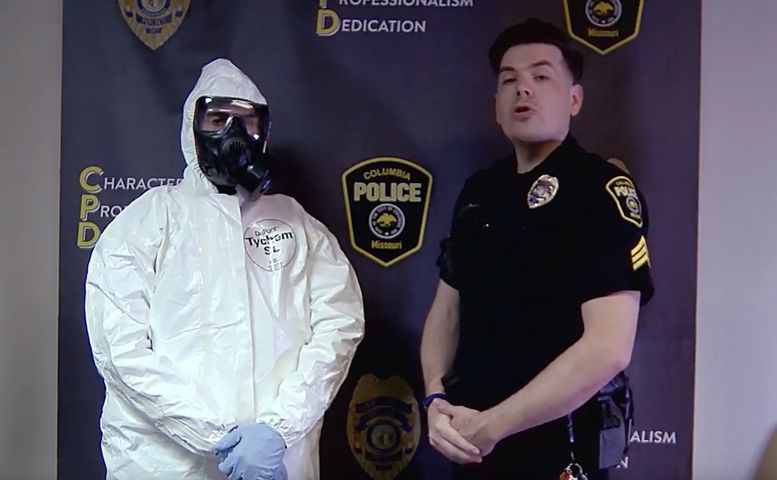 COLUMBIA - COVID-19 has already changed many aspects of daily life, from visiting restaurants to attending school. Now, first responders are also making changes to protect themselves and their families.

The Columbia Police Department said their officers will possibly start wearing personal protective equipment (PPE) when responding to calls, in a video released on Youtube. The department is continuing to stock-up on equipment from past training for law enforcement and other agencies who have given equipment.

Columbia Police Chief Geoff Jones said the department has a number of different procedures in place to keep officers safe, including their families, since officers interact with people throughout their shifts. Those include limiting face-to-face contact with people, and constantly cleaning officers' cars and uniforms.

Jones said the department has enough PPE to last a few weeks, but the supply can become smaller more quickly if more people become infected. He said he's concerned about his officers' safety.

"I want to make sure we have enough equipment to protect them and the people we're serving," he said. "I understanding that one person having contact with multiple people could be a source for contamination, so we don't want to be that source. So it's not just about officer safety, but community safety, and I think we're all concerned with that."

He said he feels lucky and fortunate his officers have continued to show-up to work, especially with understaffing at the Columbia Police Department.

Dale Roberts, Executive Director of the Columbia Police Officers' Association, said some officers are scared about possibly bringing the virus home to their families, especially since symptoms develop after getting the virus.

He said the department has been very responsive to keeping officers safe, but said he's more concerned about the mental aspect of possibly being exposed.

"I think if there's worry, it's less about equipment and more about, it just wears on a person to constantly be worried if they're taking this virus home," he said. "Am I exposed to this virus? Am I sharing it with my co-workers? Because officers are a close knit family, so I think it has the potential to really wear on them."

The Boone County Sheriff's Department, in an email, also said it has appropriate PPE for its deputies, but will only use it when it is needed.

"PPE is in short supply currently, so we are not wearing it on all calls, as this would be an irresponsible practice for us at this time," Sergeant Brian Leer said. "As always, when our personnel suspect there is a likelihood they will be exposed to a communicable disease, such as COVID-19, they are expected to utilize appropriate PPE issued by the department."

Other rural areas with less cases have struggled to have an acceptable amount of supplies. One county sheriff's office with this problem is Howard County, which borders Boone County.

Sheriff Mike Neal, the Howard County Sheriff, said it has a very small amount of PPE supplies for it's deputies.

His only gear, other than a few bottles of hand sanitizer he bought at Dollar General and 50 masks donated by a local dentist, is 19 year old equipment. He said he feels like law enforcement has been forgotten about, and doesn't know when he will receive equipment.