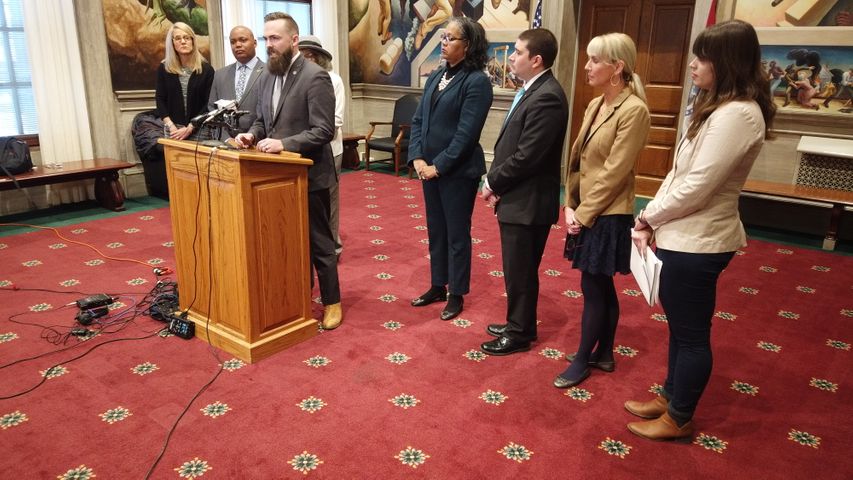 JEFFERSON CITY - Bobby Bostic wasn't supposed to see freedom after his prison conviction at age 16 - his sentence was for more than two centuries. But House Bill 2201 could change this.

Rep. Nick Schroer, R-O'Fallon, is working with the judge who convicted Bostic in 1997 to change criminal sentencing reform for minors. Judge Evelyn Baker sentenced Bostic on 18 charges for armed robbery, among other things. She spoke in a press conference Tuesday on why the legislation and her ruling should be overturned.

"No one should ever be sentenced to life," Baker said. "People should be able to prove that they have rehabilitated themselves, that they have reformed and that they are no longer a threat or danger to society."

Graham v. Florida, a 2010 Supreme Court case, upholds that juveniles cannot be sentenced to life imprisonment without parole for non-homicidal offenses. In the case of Bostic, no one was killed or seriously injured.

Sara Baker, a representative for the ACLU of Missouri, was part of a separate effort to file a petition requesting clemency from the governor for Bostic. She said Missouri is one of five states that still permits a consecutive sentencing loophole that allows the conviction of juveniles in this way.

"He is changed," Sara Baker said. "What he wants to do is get out and help make sure other youths don't go down the same paths that he did."

"Now he's a 40-year-old man," Judge Baker said. "He's written books, he writes poetry and he is trying to help as many people as he can in a confined environment. He can do so much more if we let him out."

She argues Missouri is one of few states with this legislation because of the state's conservative nature. Judge Baker said Missouri spends more as a state incarcerating people than it does educating its youth. She described Bostic as just a child when he was convicted -- someone who lacked the attention and education to encourage a different lifestyle.